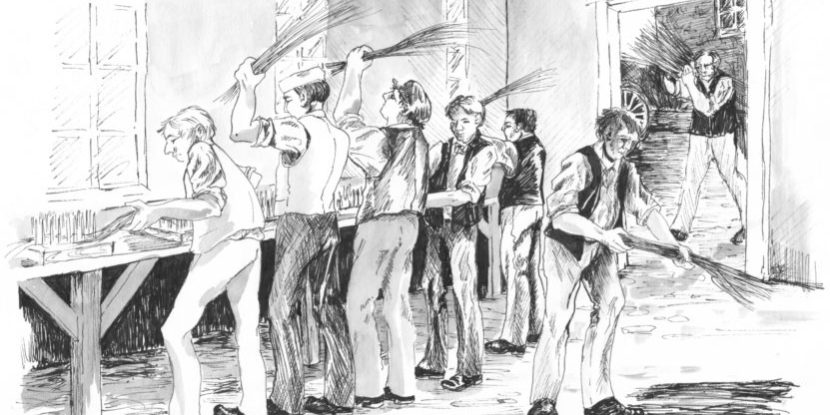 Beaminster Museum is a vibrant and thriving attraction in the town. Its volunteers busy themselves all year round with heritage-related events and activities in addition simply to opening its doors to local residents and holidaymakers. In 2019, in recognition of their efforts, they won the prestigious Queen’s Award for Voluntary Service.

Visitors often ask what is special about Beaminster from a heritage perspective. And the answer is probably sailcloth.

In the days when the oceans were ruled by tall-masted sailing ships, whether carrying merchandise for trade or guns for war, linen sails were in great demand. The process for turning a field of flax plants into a linen sail for a sailing ship was complex, lengthy and extremely labour-intensive. When, however, it was done in bulk by expert practitioners, it could be made profitable.

And Beaminster had a reputation for such expertise. Most of the townspeople not labouring on the land followed in their parents’ footsteps as flax dressers or sailcloth weavers. Many started in the industry as young as six, helping to supplement the meagre family income. It was dusty and noisy work. While some of the weavers had handlooms in their own homes, most of the workers in the flax industry put in long shifts at one of the several mills and factories in the town. The major employers were the Cox family, Lords of the Manor, whose spinning mill and weaving sheds were near where the Yarn Barton car park is today. The yarn barton itself was a grassy open space where the sheets of sailcloth were laid out on trestles to dry after each round of boiling and bleaching required by their biggest customer, the Admiralty.

In actual fact most of the flax itself was grown abroad, and the sails themselves were sewn and finished in South Somerset. Boats from countries like Latvia would dock at Bridport Harbour (now West Bay) and the flax bundles would be carted up the Brit Valley to the mills. What the Beaminster workers were good at was ‘dressing’ the flax – retting, rippling, breaking, scutching and heckling – so that the strong fibres from inside the stems could be spun into linen yarn, then at weaving the yarn into fabric. Sailcloth was the most important end-product, but local weavers made plenty of other things too, such as linen bags, smocks, fishing nets and tarpaulins.

Beaminster became a bustling hive of industry. Everyone took pride in their work. It is said that the locals took personal credit for Nelson’s victory at the Battle of Trafalgar in 1805 on the grounds that his ships bore sails made from the town’s sailcloth.

That, however, proved to be sailcloth’s heyday. Not long after Nelson’s time, flax processing fell into sharp decline. Beaminster’s authorities encouraged the creation of a suburb called Newtown with a church of its own to cater for the envisaged population boom, only to find that demand for sailcloth had dropped away significantly when northern towns began turning out cotton products. Cotton sails proved every bit as reliable as linen ones, but they were lighter and cheaper. Then, of course, steamships took over from sailing ships.

There was no way Beaminster could compete. There was insufficient water in the tiny streams for old water-powered mills and factories to upgrade to larger steam-driven operations. There was no canal or railway in the Brit Valley, so transport costs made things even worse. By the mid-19th century most of the flax companies in Beaminster and the surrounding villages had closed down for good. Several owners went bankrupt. Many workers had to move away in search of employment elsewhere.

You can still see traces of the sailcloth industry in Beaminster today. Some mills still stand, even if only as private residences. You can see the evidence of millponds, weirs and leats. You can see weavers’ cottages.

To learn the full story – and to discover many other fascinating aspects of Beaminster’s past – just take a look inside Beaminster Museum! There’s lots to see and do for all ages.