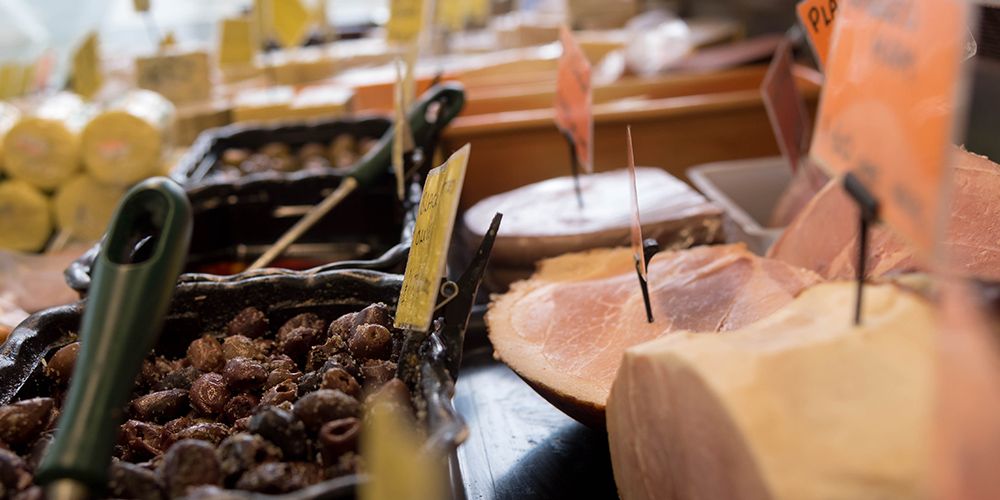 Olivia Coleman has been there. Martin Clunes has too. Even Chris Evans when he was in town, made this his destination of choice. We’re not talking about the local pub, we’re talking about Nick Tett Family Butchers, in the heart of our own town Square.

Visit Beaminster on a Saturday morning and you’ll find the town bustling with locals and visitors alike, hurriedly picking up their favourite sausages or bacon for their morning fry-up, or some stewing beef for their traditional casserole. You’ll find people popping in for a selection of their favourite local cheese, a jar of olives, some honey or, more recently, a selection of ready-made meals for those who just don’t feel like cooking!

We recently caught up with Nick about his years of running the business and what he loves about being in Beaminster.

“This business has always been a butchers, and when I took over, it was looking for someone to breathe new life into it. The previous business fall under hard-times and had closed, until I took it over, 10 years ago now,” he tells us. “I started my career at SJ Normans Butchers in Bridport followed by a move after 10 years to another Bridport butcher, Framptons of Bridport before deciding to start my own business in Beaminster,” he adds.

Nick had originally thought of moving towards Lyme Regis to open up his own Butcher shop, but there were no opportunities that became available. As fortune would have it, a failed butcher business, on existing premises that were already ready to be used became available for purchase, and Nick decided on making Beaminster his new home! “I was ready to start working for myself and this was a perfect opportunity to do that,” he tells us.

Nick has also seen his fair share of change over the past 10 years, and when the town has faced obstacle, Nick has, as with many of his business colleagues, seen continued local support from not only Beaminster residents, but residents from further afield such as Crewkerne, Drimpton, Broadwindsor and more, who always find a way to get to the shop and find what they need.

We speak about the busy season which lies ahead. Christmas, inevitably, being the time of year when pre-orders become priority, BBQs turn to slow-cooked casseroles of oxtail and traditional meats turn towards venisons and speciality hams. “We’ve already taken orders for Christmas! We took an order in August already, for Christmas meats, but traditionally most people place their festive season orders around the 2nd week of November,” he says.

And as venison, partridge and pheasant starts to make an appearance, so too do ox cheeks and oxtail. As the Autumn season arrives, seasonal requirements lead the lists and people start to turn towards stews, using some of the best local produce that they can get their hands on. And Nick makes sure that he can find what people need, when they need it. But it’s a diversification in his business that has captured a lot of attention this year, and that was the introduction of his ready-meal options.

“People may not be in the mood to cook, but they still want great quality, home-cooked food, and we launched our ready-meals to offer that to people who were still conscious of quality, locally-sourced meats,” he says. And since launching in-store, Nick also supplies his ready-meals to other businesses who may be looking to offer their own customers something special. “Bradpole Post Office has just re-opened, and they’ve decided to stock our ready-meals too, as an extra value-add to their customers,” he tells us. And in the spirit of collaboration, Nick is always willing to work with other businesses who may be interested in stocking it in their own shop too.

On their shelves, they also stock preserves and chutneys, cereals and more, but it’s their range of cheeses that truly stand out. In fact, while we’re talking, Kate, owner of next door’s Rambling Rose, Beaminster’s amazing florist, pops in for a piece of her favourite cheese too. “We have 2 main suppliers of our cheeses, and we try to keep our cheese as local as possible. We have selections ranging from Dorset Blue Vinney, to Cornish Brie, Dorset Red Cheddar and more, but we also cater for people who desire something from slightly further afield such as Greece, Cyprus and Italy.”

Nick has seen his fair share of rogue customers try to take advantage of his produce. “We had pheasant that came into the shop once. Didn’t really want anything, he just came in the front door, and headed straight out the back door. Then again, we’ve had a seagull that helped himself to a pack of porridge oats, straight off of our shelf. Not quite sure how he managed to spot that!”.

Nick also supplies his meats and produce to other Beaminster and surrounding businesses. “We supply produce to the Greyhound and the Red Lion. We also supply the Broadwindsor Craft Centre with their sausages, bacon, weekend roasts and more, too.”

If you’re on the hunt for quality meats, ready-meals, or your favourite preserve or cheese, then make sure you pop into Nick Tett Family Butchers in Beaminster Square!