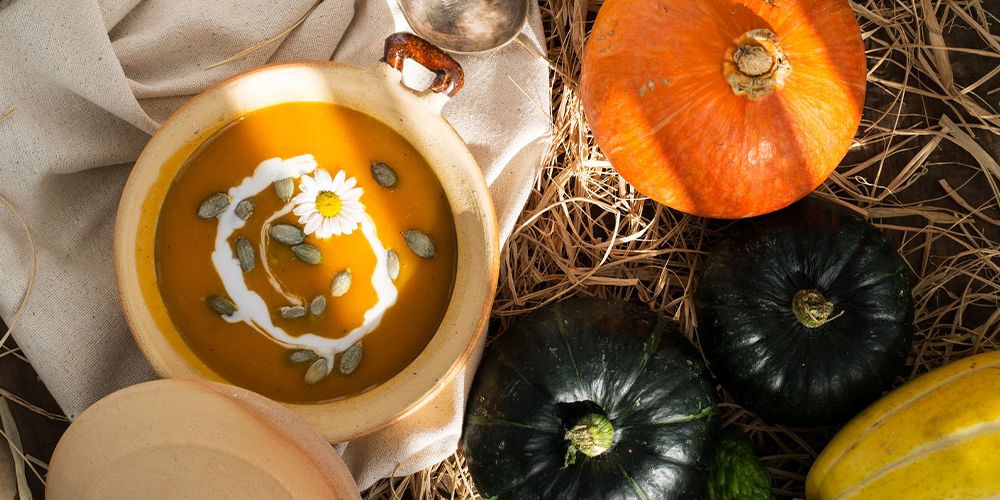 When the Autumn air picks up, we instinctively turn to our slow cookers to create our favourite stews and soups. And with the abundance of lovely pumpkins and squash that we have available, there’s more than enough inspiration to turn even the most nervous chef into a connoisseur! We picked out just a few of our favourites that are guaranteed to warm the cockles of our hearts, and keep the winter chills at bay!

And, despite what many may think, pumpkins aren’t just for carving!

• Get the Oven heated to 200 degrees. Spread the pumpkin onto a baking tray and scatter over the onion, sage and garlic.
• Drizzle with the olive oil and season with salt and pepper. (A dash of nutmeg or cinnamon is also a rare treat and adds a little sweetness to your meal).
• Roast for 20 minutes.
• At the same time, parboil the potatoes for about 8 minutes until they’re just tender enough to cut through them. Drain and set them aside.
• Blend the pumpkin mix and potatoes together with some vegetable stock and bring to just below the boil. Simmer for a few minutes and serve with parsley scattered over and some crusty bread (we usually recommend a delicious warm loaf from our own Evershot Bakery, or even pick up some Wonky Cottage sourdough from Brassica).

If you’re in the mood to do something with the kids next week, and enjoy the spoils afterwards, then you may want to whip up a batch of pumpkin cupcakes! Here’s an easy recipe that will help you to get started.

Preheat your oven to 190 degrees / Gas 5.
Grease 24 muffin cups, or line with paper muffin cases.
Sift together the flour, 1 teaspoon cinnamon, nutmeg, ginger, clove, allspice, salt, baking powder and bicarb; set aside.
Beat 110g of butter, caster sugar and brown sugar with an electric mixer in a large bowl until light and fluffy. The mixture should be noticeably lighter in colour. Add the room-temperature eggs one at a time, allowing each egg to blend into the butter mixture before adding the next.
Stir in the milk and pumpkin puree after the last egg. Stir in the flour mixture, mixing until just incorporated. Pour the cupcake mixture into the prepared muffin cases.
Bake in the preheated oven until golden and the tops spring back when lightly pressed, about 25 minutes. Cool in the tins for 5 minutes before removing to cool completely on a wire rack.
While the cupcakes are cooling, make the icing by beating the cream cheese and 50g butter with an electric mixer in a bowl until smooth. Beat in the icing sugar a little at a time until incorporated. Add the vanilla extract and 1 teaspoon ground cinnamon; beat until fluffy. Once the cupcakes are cool, ice with the cream cheese icing.