A musical sensation returns to where it all began! 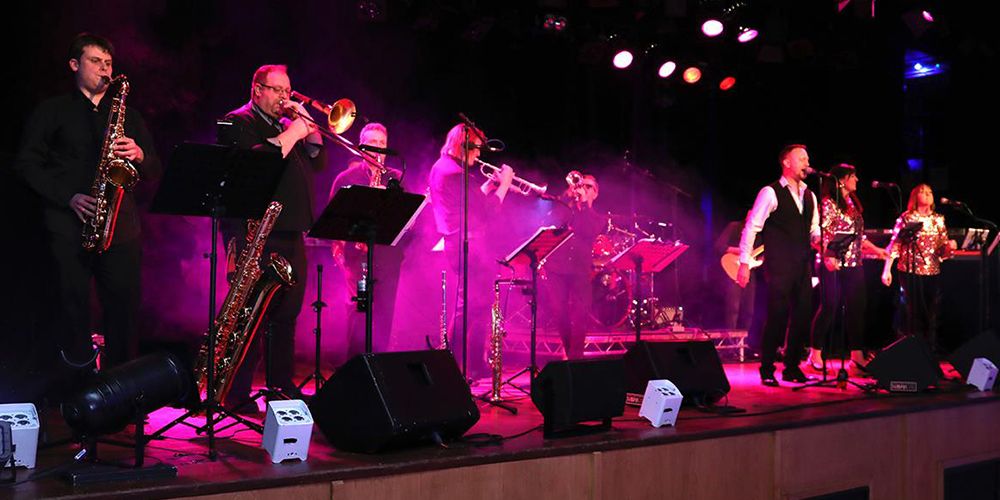 A musical sensation returns to where it all began!

Beaminster residents are no strangers to the magical sounds of the DT8 band. For years, they have entertained at Beaminster Festivals, coupled with dancing in the square, and 19 years later, the band continues to make music that brings foot-tapping joy whenever they perform.  And for 1 night only, the DT8s return to the place where it all began, the Beaminster Town Hall.

We spoke to Georgie Garrett to understand more about the story behind this 12-piece band.

Who is the DT8 band?

DT8 is made up of a group of professional musicians, the majority for which music is their “day” job. We could be described as an eclectic mix in terms of ages and backgrounds, but we all share a love of music and have plenty of fun taking well known tracks from across the decades and putting our own 12-piece spin on them. We have an unusual mix of three vocalists (allowing some great harmonies) keys, guitar, bass, drums, trombone, two trumpets, baritone sax and alto sax (who sometimes multi-tasks with a flute or soprano sax). Oh, and Mark our lead vocalist sometimes gets his harmonica out too!

Where did it all start and how long have you been together?

Around the year 2000 some dear friends in Beaminster were involved in a terrible car accident. Although the two children had more minor physical injuries, their mother and father were severely injured. Keith, our guitarist thought about putting on a gig to raise money for the family and managed to rally around Beaminster and gather some talented local musicians to put on what was supposed to be a “one night only” gig. The only name Keith could think of was DT8 – the local postcode. The gig took place on 11th August 2001. Almost immediately, the band was asked to perform again and although many of the initial line-up were unable to carry on, Mike (our trumpeter) and Keith began looking for regular band members and thus the band has carried on from there. The band has had several reincarnations over the years, but Mike and Keith, who both still live in Beaminster are our constant!

What are some of your happiest memories as a band?

Whilst we have undoubtedly shared some wonderful highs, being part of some fabulous wedding receptions, charity balls and some crazy young farmer’s do’s! Nothing probably beats the high of that very first charity gig that brought the band together. The people of Beaminster united and raised several thousand pounds for the family. Likewise in 2018 we were lucky enough to be asked to perform at another wonderful Charity Ball which raised over £21,000 for children’s charities. Being part of something like that is a real honour.

Ever had things go wrong that you’re willing to talk (and laugh) about today?

Actually we have been very lucky. There’s been the odd technical hitch with mud, water and power cuts but we’ve always come up smiling!

You’re coming back to Beaminster for one night only – why?

You could say this is a bit of a pun really, as that very first charity gig was for one night only, and over the years we have done the odd appearance at the Beaminster Festival or Red Lion festival. In 2018 we decided to come back and show Beaminster the brand new line-up as many people had been nagging Mike and Keith to get organised and come back! The Red Lion provided the bar and we provided the entertainment! We absolutely loved it and so did the audience so we thought why-not we’ll do again in 2019! Our diary is often booked up a year or so in advance with weddings and corporate parties so it’s lovely to find a spare night to come back to our roots.

What are your favourite songs to sing?

We all have different favourites! with 12 of us and generally around 2/3 hours of tracks each time we all get plenty of chance to enjoy our favourites. We have a really large repertoire and are adding new things all the time so then it’s lovely to go back and pick out an old favourite that we might not have played for a year or two and give it a new lease of life!

What are your plans for the future?

We love what we do and have a really lovely atmosphere when we get together. We just want to keep doing what we’re doing and share our music with many more newly weds, birthday boys and girls, and office parties! We get to see some wonderful venues too

What do you love most about Beaminster?

I asked Keith to answer this question as one of the founder members. He said his folks came to Beaminster in 1976 to take over a pub and it was the best move they ever made. Mike has lived in the town all his life and lives just down the road from where Keith’s family pub was so really they’re part of the furniture of Beaminster and part of the furniture of DT8 too. Beaminster folk have been an amazing support to DT8 through all of its various line ups over the years and we are very grateful for that and won’t ever stop popping back “for one night only!” from time to time!